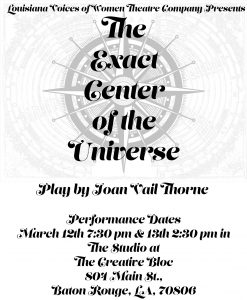 Performed September 20 & 20, 2014 In the Hartley-Vey Studio of Manship Theatre Baton Rouge, La Mamie Bush struggles amid the excitement of the opening of her New Orleans cabaret to win back her husband and child; to reconcile with her mother-in­-law and her best friend; and to succeed with the support of her white, surrogate, Jewish mother in her one-woman show dedicated to the extraordinary, iconic Josephine Baker. Filled with the passion and turmoil of the “Big Easy,” “La Bakair” inspires and entertains while voicing the tenacity of the female heroes. “La Bakair” by Elizabeth Brown-Guillory Directed by Dr. Aileen Hendricks Assistant Director: Niesha Bentley Scenic Designer: De’Anna Ernst-Principal Ernst Design LLC Learn more about this production – Click Here!