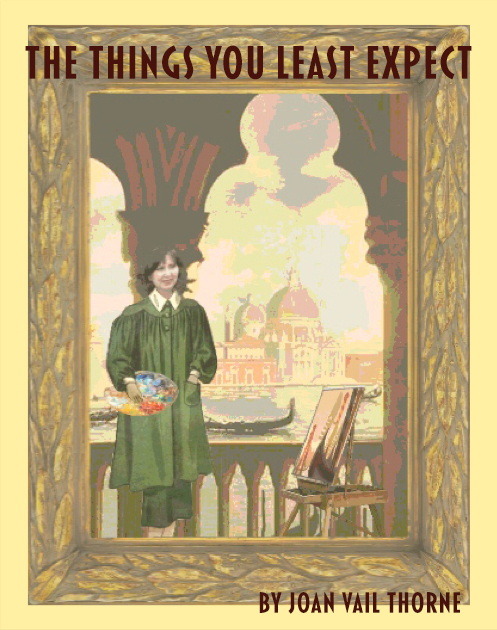 THE THINGS YOU LEAST EXPECT

Next Evening, Hotel Suite in Venice

Kristina Web Shapiro, Attorney, LA VOW Legal Agent. She is a partner in the firm Shapiro & Shapiro, LLC. On the web at: www.ShapiroAndShapiro.com.

DéAnna Ernst for the set and property acquisitions
Phone: (225) 926-7389
Email: ernstdesignllc&gmail.com
On the web at: www.ernstdesignllc.com

Dianne Eoduard (Myra)
I was a teacher…a most un-teacherly teacher…one of my favorite students said. And I took those words as compliment indeed. In fact, much of who I am…writer, painter, actor, collector of things odd and ornamental…is prefixed by an “un”. For I have lived passionately and unconventionally.

Jerel M. GiarrussO (Clare)
Jerel M. Giarrusso, an accredited, veteran public relations professional, is retired as the Director of Communications for the Louisiana Office of Juvenile Justice. She holds a Bachelor of Arts in Journalism from LSU, and branched into public relations after several years in news reporting. A New Orleans native, Jerel and her husband, Ted Hansen, have two adult children and share their mini-estate with a horse, several dogs and cats, and innumerable rose bushes. She enjoys spending time with family and friends, Bible study, gardening, writing, photography, travel, cooking, creative needlecraft and history studies, in no particular order. Active in civic affairs and in her church, she participates in annual Central American missions as a member of the church mission team.

Although she enjoys attending stage and cultural productions, Jerel’s only stage appearance since junior high school about a half-century ago, was LA VOW’s recent production of The Exact Center of the Universe. She appreciates the opportunity that LA VOW has given her to learn stagecraft and appear on its stage. Jerel credits much of what she has learned about theatre to her daughter, AEA Stage Manager Elena Hansen, MFA, who currently teaches stage management at the University of Northern Colorado.

K.K. Landreneaux (Caroline)
K.K. is from St Francisville, a BRCC acting student and this play is her LA VOW and stage debut

Robert J. Wilson (Sam)
Robert is making his LA VOW debut in “The Things You Least Expect”, but has been involved in theatre for more than 30 years. An actor and director, Robert performed in/directed a host of productions ranging from Guys & Dolls, Crazy for You, Bye Bye Birdie, Neil Simon’s Fools, Why We Fall, Charlotte’s Web, House for Sale, One Flew Over the Cuckoo’s Nest, Wintertime, Proof (Asst. Dir.), Carol: A Broken Chain, Lend Me a Tenor, and many more. He has worked with troupes/companies across South Louisiana, including Acadiana Repertory Theatre, Opelousas Community Theatre, Theatre Baton Rouge (then-BRLT), Dee Cothern’s Cabaret Theatre, Denham Springs Area Community Theatre, and Thespian Troupe 5034 (Lifetime Member). Robert is a Central native and is thrilled to return to the BR stage. To Donna: thanks a million for returning that voicemail! To my Roger: Thank You for all of the…rapture!

Aileen Hendricks (Play Director & Artistic Director of La VOW Theatre Company, Incorporated August 30, 2013 as a non-profit 501c3)
She has more than 50 years experience in amateur, professional, community and educational theatre. She recently retired (December 14, 2014) from Southern University as a full professor of Speech and Theatre after 23 years of service. She has written plays; published scholarly articles; and won awards from the community, professional, educational and artistic organizations. One of the first women to graduate from Texas A&M University in 1971 (1974 Masters), she earned her doctorate in theatre from LSU in 1988. She is married to Donald Luke Couvillion and the proud mother of August W. Wenck, Robert W. Wenck Jr. and Yolanda Prevost-Robinson.